One of the best things about children is how they accept all living creatures without judgement. Their hearts are filled with love and joy and they are willing to share their excitement for life with everyone they meet.
The video you are just about to watch captures the heart-warming moment a two-year-old baby gorilla named Kamoli is playing a game of peek-a-boo with a toddler at Columbus Zoo in Ohio, and the footage is going viral.
The young gorilla was hanging out alone in his enclosure behind some glass in the Congo Expedition area when the little boy named Isaiah decided to came to play with him. Curios to see what the boy is doing; the gorilla came closer as well. The gorilla was obviously intrigued by the boy who, encouraged by his parents, started pretending to be a gorilla himself.
And from that point in, playtime began. The two engaged in a fun game of tag in which Kamoli ran to one side of the enclosure and the toddler followed him.
The clip showing them two playing together got more than 3 million views on YouTube alone, and it will put a big smile on your face as well. 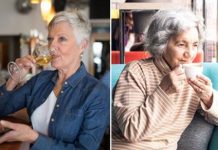 Drinking alcohol and coffee may be the keys to living longer, scientists find