Ever wondered where do pets in pet stores come from? Well, according to PETA, the majority of the animals sold in pet stores come from mass-breeding facilities called puppy mills. There, pets are kept in inhumane conditions. They are denied socialization, exercise, and veterinary care.
What’s more, baby animals are taken away from their moms when they are still extremely young, and shipped to stores across the United States in overcrowded crates, often without enough water or proper ventilation.
The people working at puppy mills only care about making a profit, so the best way to fight against this practice is to simply stop supporting their activity. In other words, don’t buy animals at pet stores unless you know where they come from.
San Francisco is one of the first cities in the United States to stand against puppy mills through a wonderful legislative initiative that prohibits pet stores in San Francisco to sell animals that come from puppy mills.
Pet stores will only be allowed to sell rescued animals. Also, once the order goes into effect, pet stores will no longer be able to sell puppies and kitten younger than 8-months old. The San Francisco Board of Supervisors unanimously voted to change the city’s health code under a proposal from one of the supervisors.
Officials say that this order won’t affect responsible breeders and that its sole purpose is to protect animals from unscrupulous puppy mills owners who treat these animals as if they were lifeless objects that don’t have any feelings.
As you can imagine, the news was extremely well-received by animal lovers and activists. Watch the video below to get more details. 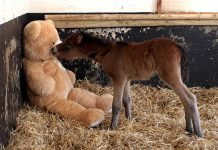