The other night, residents of a neighborhood in Simsbury, Connecticut woke up because of the cries of a bear who got stuck into a storm drain. The concerned citizens alerted the authorities, and wildlife officials from several agencies rushed to scene. But soon as they reached it, they realized the distressed bear wasn’t alone, but with her two tiny cubs.

“When we put a flashlight down there, it was a tagged bear looking up at us, which is the last thing you expect to see,” Scott Conrad, one of the residents explained to the WFSB.

With the bear family stuck into the drain system for hours, the rescuers had to move fast, but the presence of the cubs turned the rescue into a very delicate mission. The wildlife officials initially used a pice of wood and a ladder as they hopped the mother bear would eventually climb on it to get out. But that made the things even worst, as the animal got scared and went deeper into drain.

The mother bear was trying to protect her babies in the first place, but for the rescue team there wasn’t any viable option to get the out, but to make the mother to climb onto the ladder.

The tough rescue was captured on camera by a local photographer, who later shared the photos on Facebook.

“There was a bit of excitement today in Simsbury, CT when a momma bear and her cubs were discovered in one of the storm drains on a residential street,” the photographer wrote. “She was crying throughout the night, heard by neighbors who called for help.”

Fortunately, the day was saved by wildlife biologist Jason Hawley, who imitated a cub’s call, and that made the mother to come out from the drain!

“Bears have such a strong maternal instinct, that they’ll respond to it, even though she had both of her cubs with her,” the biologist told Hartford Courant. “It was about three hours we were sitting out there waiting and eventually once we got everyone backed away and she felt comfortable with her cubs, she was the first one to poke her head up and exit. Then she helped her two cubs come out of the storm drain.”

More about this incredible rescue in the video below! 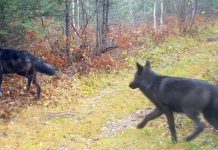 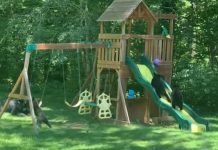 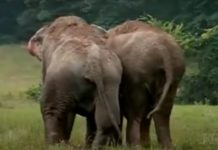