Traveling to exciting new places is one of the best things in life. The not so great part about traveling is being stuck in an airport for hours because your flight has been delayed or because you have a long layover.
If you’ve ever been in this situation, you know how frustrating and plain out boring it can be to just stand around in the waiting room with nothing to do. But there are certain people who can always see the glass half full and make the most out of any situation.
The hilarious man in the video below is definitely one of those people.
He single-handedly managed to turn a busy, crowded gate into the scene of a highly-entertaining karaoke party – and everyone there waiting to board the flight was invited!
It all started after airport personnel from the Nola Southwest airline required everyone who asked a question to sing a song. It was their plan to pare down the line, but instead of feeling intimidated, this guy took it as an invitation to put on a show.
It’s hard to properly put into words what happened next, so it’s best if you just see for yourself. This is awesome!

Jimmy Asks Celine to Impersonate Michael Jackson, Has to Stop The Show When She Starts To Dance 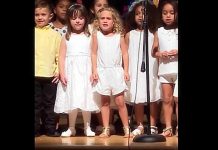 Preschoolers Line Up for Music Show, Keep Your Eyes On Tiny Blonde Girl in The Middle